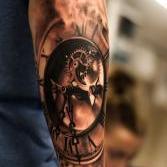 By Nossgrr,
September 13 in General 3DCoat